‘Meru, Mandara and Kailasa are the first three names amongst the twenty types of temples described in the early texts…all three are the names of the Mountain, which is the axis of the world: that is Meru, the pole of the earth; Mandara as churning rod, planted on Vishnu, the tortoise during the Satya Yuga…and Kailasa, as seat of Siva in the Himalaya. In these names rises the temple, the image, the aim and destination of this world edifice.’

The Hindu Temple, Part V, page 161,
‘The Image of the Mountain and the Cavern’
Stella Kramrisch


‘In Vijayasena’s inscription at Deopara…the high temple of Pradyumnesvara is compared to the (central) Mountain on which rests the sun at midday, and this is the only Mountain worth mention among all mountains.’

Capricorn is the Mountain is India. This new way aphorism fulfils the specifications of the sacred texts for temple building in a more tangible manner because what is conveyed in the physical structure is vitalised by the connection with the zodiac. On this ancient basis what the architectural and scriptural prescriptions contain can be made factual through Number and Calendar, provided the correct systems are used, unlike the Hindu calendar in India today. Capricorn is ever and always the key for India, its ruling sign. I have explained some of the new Vedi’s temporal applications in the earlier parts of this series; we must now include the final ingredient: India. How does the Mother’s chamber accommodate the subcontinent in her design in applicable, factual terms? If it is a hymn to Saturn and Saturn is India’s planetary ruler via Capricorn, then India must figure centrally – and indeed she does. She occupies pride of place.

Capricorn is the Mountain is India is the Globe is 70cm – so goes the complete equivalency, highlighting once again the Globe of the Core measuring 70cm, as specified by the Mother. The correspondence comes through the Capricorn hieroglyph laid across the landmass of Akhand Bharat with its longitude and latitude coordinates as shown in the diagram below; they measure exactly 30+40=70cm of the Globe. 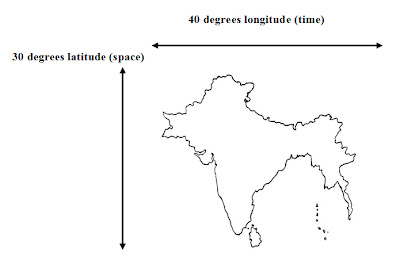 Not only does Gnosis reveal the time factor of the appearance of the 9th Avatar but also the place. The 10th hieroglyph delineating the integral 30+40 of the subcontinent landmass shows us graphically where the passage from 9 to 10 must occur. This is an example of how integration takes place – hinging on the realisation of the 9 becoming 10. The 10th sign is both time and place (space). It is the living abode of Mahakala, Mt Kailash descended on Earth as illustrated:

Further, if we lay the zodiac across the bands of longitude of 30 degrees each, the same as each sign, amazingly Capricorn begins at 60E, as indicated above. When the zodiac is laid across latitudes Capricorn also covers India (6N to 36N). (See The New Way, Vol. 2, Chapter 9 for details.) In both directions Capricorn ‘covers’ India, a further proof of the wisdom of the Ancients who could ‘see’ this rulership without the need of satellites.
To complete the understanding of Saturn’s role, we must return to the symbolism of the Mountain which I referred to in Part One. Prof Ramachandra Rao considers that the Gopuram of Hindu Temples was an evolution of the primitive funerary mound to the more sophisticated Mountain symbolism of the Gopuram. However, it is actually India’s zodiacal sign, Capricorn/Makar, ruled by Saturn, that has given rise to the Mountain/Gopuram because Capricorn is the sign of the Mountain, uttarayana, or the northernmost and highest point in the wheel, known as Cosmic Midday when the Sun casts no shadows, ‘…the (central) Mountain on which rests the sun at midday, and this is the only Mountain worth mention among all mountains’ (Pradyumnesvara temple inscription).

This knowledge was alive and well in the Puranic era; temples across India bear witness to this fact. They were repositories of the same secret knowledge of the Rig Veda. What can be known of India’s destiny ignoring these facts? If we refuse to see the consistent coherency of her destiny via the 10th sign, Capricorn/Makar, how can she physically become the World Mountain, centre/soul of the Earth? But if the cosmic script itself forms the background of the geometry and later the architecture, the conclusion can only be that the Ancients had knowledge of Time and Cosmos which required the Geometry of Time to understand, through the initiation process of the Journey. That Geometry of Time also lies at the heart of the Mother’s vision and original plan.