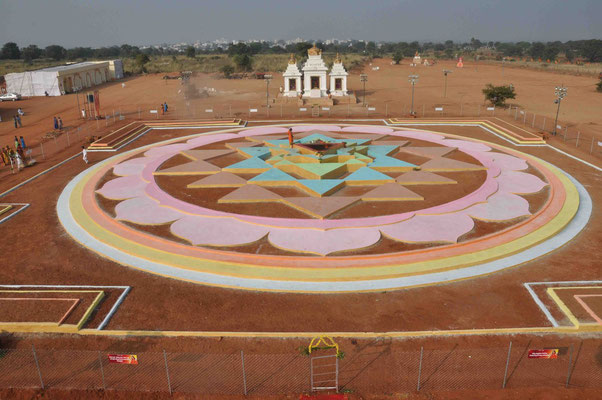 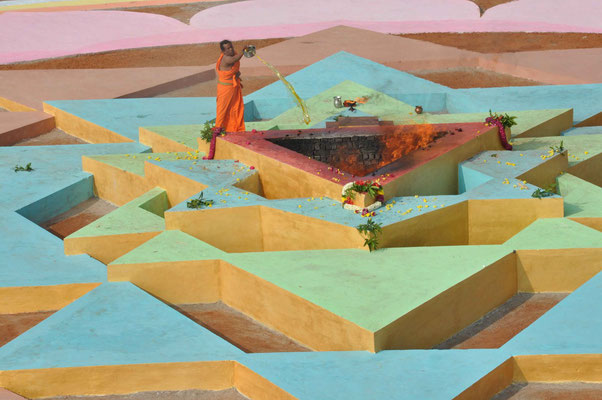 Vishvakarma  the presiding Deity of all craftsmen and architects, the principal universal architect who fabricated and designed the divine architecture of the Universe at the behest of Brahma, the Lord of Creation.

He is also known as Devashilpi, or 'The Architect of Gods', and is pictured in his four-armed form, carrying a water pot, a book, a noose and craftsman's tools. His mother was Yogasiddha, sister of Brihaspati, and his father was Prabhas, the eighth hermit of the legendary Astam Basu.

The Rig Veda describes Visvakarma as having multi-dimensional vision and supreme strength. He is able to predict well in advance in which direction his creation will move. In later texts identified with Tvastr, he is the divine craftsman of the whole Universe (Rig Veda 10.81.3), and is the builder of all the demigods' palaces.

Vishvakarma is also the designer of all the vimanas, or flying chariots of the gods, as well as their weapons and divine attributes. He is said to have revealed the Sthapatyaveda, or fourth Upa-veda, and he presides over the sixty-four mechanical arts. Vishvakarma is also credited with creating the missiles used in epic battles, including the Vajra, the sacred weapon of Lord Indra, which was fashioned from the bones of the sage Dadhichi. He also designed the Triloka, the tripartite universe consisting of the material world, the heavens, and the netherworld.

Each person has an individual deity called the Ishta Devata who help him grow spiritually, which is reflected in the Birth Chart.

Whether or not the person is hindu, through birthchart reading, Knowing the nature of this deity and the planet associated it, can help him identify, Meditating on which Planetary Yantra, will help him remove obstacles along the spiritual path.

While Yantra Meditation with Mantra, allows the person to cultivate a relationship with a particular aspect of the divine, that is particularly harmonized with his own nature. This Yantra can very well be placed in the house Temple.